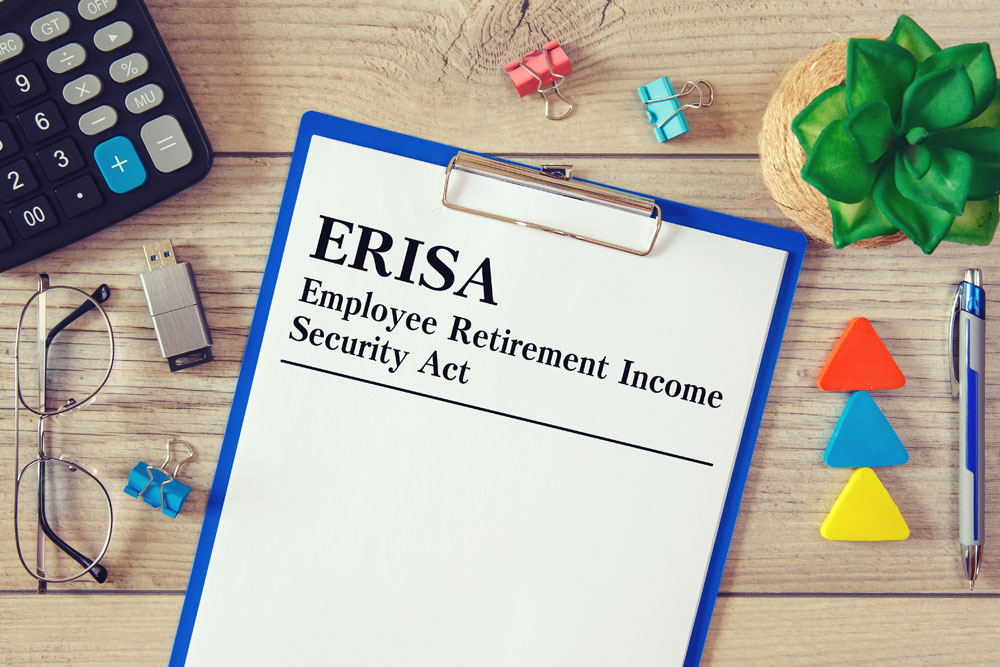 ERISA is an acronym for the federal Employee Retirement Income Security Act of 1974. Most people have never heard of ERISA, but its comprehensiveness impacts the vast majority of American workers and their dependents. The original intent behind ERISA’s enactment was to remedy pension plan abuses; however, just prior to Congress’ passage of the ERISA law, the scope of the legislation was dramatically expanded.

ERISA covers all employer-sponsored benefits with very few exceptions. The law applies to retirement and welfare benefits (see below) and encompasses both self-funded and insured plans. The only exempted workers are those who are self-employed, government employees, and employees of religious organizations (church plans). While many of the specific rules governing ERISA are highly technical, the following discussion tries to simplify the main principles.

What Employee Benefits are Covered by ERISA?

Anyone who works for a private-sector organization that sponsors a 401(k) plan (or 403(b) for non-profits) receives an ERISA-governed benefit. Because of ERISA’s reporting and disclosure requirements, as well as the fiduciary duties imposed on the fund managers, employees’ rights are protected by ERISA and they are able to track their investments. Employers are responsible for providing employees with summary plan descriptions that describe their eligibility to receive benefits, a vesting schedule that shows when benefits become non-forfeitable, and other plan terms and conditions. Employees are protected against mismanagement by rules requiring that the plan managers act in the employees’ best interest.

In some instances, employers establish deferred compensation programs for highly compensated and/or high-level employees. Those plans are governed by ERISA but lack fiduciary protections for employees and maybe more easily subject to changing eligibility and payment schedules.

Likewise, some employees work for employee-owned companies that are owned by Employee Stock Ownership Plans (ESOP). Those plans are governed by ERISA and benefits may be forfeited if the employee does not work for the company for a long enough period.

Individual retirement accounts are set up and maintained by individuals without employer involvement. Thus, ERISA does not apply to such benefits.

Welfare Benefits Such as Heath, Disability, and Life

ERISA uses the term “welfare benefit plan.” However, that term does not mean public assistance benefits but refers to benefits that are provided for the employees’ welfare such as health, life, and disability benefits. Regardless of whether such benefits are self-funded or fully insured, they are subject to ERISA. That means if a dispute arises, many of the protections offered by state law for other types of insurance are non-existent. Examples include the right to sue for punitive damages in the event of a “bad faith” denial of benefits.

Health benefits, in particular, can raise issues. Some plans contain anti-assignment provisions, which means that when the employee sees the doctor or is hospitalized, the provider does not necessarily have the right to be paid directly by the plan. Also, if the plan is self-funded, it may not provide the protections offered by state regulation of insurance.

In addition to the exemption of government (federal, state, municipal) employees and employees of religious organizations, including religiously affiliated healthcare providers, a significant exception exists in situations where the employee pays all of the premiums for a benefit and the employer has no responsibility for administering the benefit. Plans that are set up to benefit only the owners of a business would also be exempt from ERISA; however, if any such plan covers even one non-owner employee, ERISA is implicated, and any claim brought by the employer or an employee would be subject to ERISA’s rules and requirements.

The ERISA statute explicitly states that it applies to all employer-sponsored benefits, whether the benefits are self-funded or insured.

In addition to the employee bearing the full responsibility for premium payments, there must also be an absence of employer involvement in plan administration for the plan to be exempt. Also, if the employer offers a suite of benefits, if the employer sponsors the plan, even if participation if completely voluntary, ERISA applies.

How to Avoid ERISA?

ERISA was intended to provide employees with more protection of their benefits than they had prior to the law’s enactment in 1974. However, it has not always worked out that way and employees may have less protection, such as when employers have reserved discretion to interpret plan terms and make benefit eligibility decisions. In such instances, the employee would need to prove the employer acted unreasonably or arbitrarily in order to prevail.

In short, there is no way to avoid ERISA. Employees do not have the option of paying a special premium or making a separate payment to opt-out of ERISA. ERISA’s scope is comprehensive and unavoidable.

What if ERISA Coverage Is Uncertain?

There are some instances where it is unclear whether ERISA applies. However, ERISA plans are required to file a Form 5500 each year and such filings are publicly available. The filing of such forms is a good indication that a plan is governed by ERISA; however, it is not determinative and further investigation may be necessary.

There may be no practical differences between ERISA-governed plans and non-ERISA plans, but if a dispute over benefits arises, it is advisable for employees to contact a knowledgeable and experienced employee benefits attorney for guidance on whether their benefits are subject to ERISA.

The COVID-19 pandemic has affected our health care system in many ways over the past two years. While much of the focus has been on vaccines and treatment, COVID-19 has also caused an increasing demand for mental health treatment, [1] including treatment for substance use disorders. [2] […] The U.S. judicial system is admired around the world due to the openness and transparency of judicial proceedings. Courtrooms are open to the public, and the pleadings and evidence introduced in court cases are considered public records. However, there are times when access to court proceeding documents need to be balanced with the person’s rights to privacy. […]